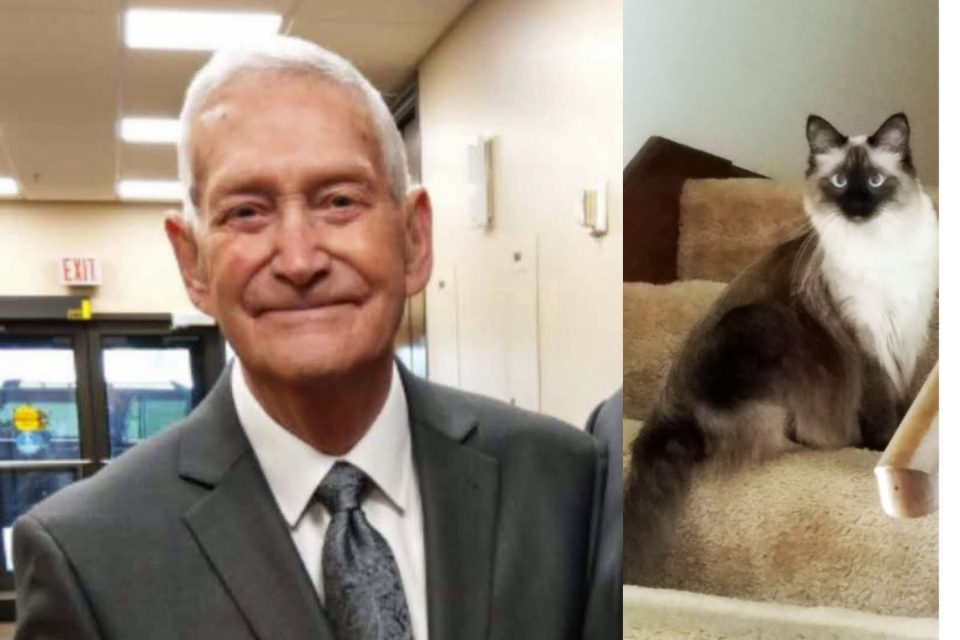 “You just don’t understand what I’m offering you,” Linda’s heart ached as these words faded faster and further into the empty apartment each time she visited. “You’re going to be so spoiled. You’re just going to love it. I’m going to shower you with attention, and as soon as dad is better,” she said, holding onto hope. “We’ll bring you back.”

To an outsider, it might have looked a little strange that Linda visited the senior assisted living facility a few times a week just to talk to herself. But hidden between the four walls – in the closet, under the recliner, tucked away and watching safely from a distance as she always did – Linda knew the one she was sweet-talking was somewhere listening. The same one who didn’t know how badly she wanted nor needed companionship after being alone by herself for so long.

Linda’s father, Bud, was admitted to the hospital on December 18 after contracting COVID. And two years before that, the family lost a mother and a loving wife, Mavis.

Luckily Linda didn’t have to face the thought of her dad being alone after her mom passed away. She knew Sabrina, the elderly couple’s cat, would keep him in good company. Quite the opposite of how she treated Linda every time she paid a visit to her parents, darting across the room at the sound of the door opening and not emerging from her secret hiding place until 10, 15 minutes after she was gone.

“Without the kitty, he was going to be beside himself,” Linda told us, which is why finding an assisted living facility that allowed pets was either going to make it or break it for this family after everything they’d been through.

It was no surprise to find out that nothing had changed now that Linda was the one taking care of her while her dad was away at the hospital. She would refill the food bowl, change the litter box, get her fresh water. But still, Sabrina was almost never to be found.

“Sabrina was their world.”

After they settled into their new apartment, Linda visited her dad quite often to help him take care of Sabrina even though the cat still didn’t want a single thing to do with her. A hostile glare from the top of the steps was the closest Linda ever thought she would get to making “friends” with Sabrina.

“I just can’t leave her in there,” Linda worried.

Not knowing where to turn, she called a local animal shelter for guidance on what to do, and they directed her to us where she ended up renting out a humane trap.

It sounds bizarre, we know, catching a house cat in a live trap. But that was the only way Linda could be sure Sabrina would be in a safe place and better taken care of by someone who loved her. Even though the cat regarded her with suspicion, maybe even downright hostility, Linda decided the only person for the job was her.

From that point, she and all the caretakers at her father’s facility were fully committed and determined to accomplish the mission they coined “Operation Sabrina.”

Unfortunately, bless his heart, Bud passed away on Thursday, January 7 due to complications after COVID. The next day, Linda went over to his apartment, her expectations low, and set the trap out in plain sight just so that Sabrina could get used to it.

Two days later, to her surprise, curiosity got the best of the cat. As Linda leaned down to put food into the trap, hissing and growling sent her jumping a mile in their air after barely touching the blanket that covered it.

“I feel so bad about how scared she must’ve been being trapped in there that whole time.”

Thinking about how scared Sabrina must’ve been inside the trap still chokes Linda up when she talks about it, but she couldn’t help but feel giddy – and so relieved – knowing Sabrina would finally be going home with her after weeks.

“The last thing I ever dreamed was that she would go in there over the weekend.”

Linda took her straight to the vet on Monday where she was fully vaccinated and groomed – TLC she was in dire need of. The next day, she introduced her to the new place she would call home. For now, it’s Linda’s bedroom on its own floor until she’s comfortable enough to explore the rest of her home and learn how to coexist with her new roommate, Linda’s 2-year-old dog.

“She’s just adapted so quickly I can’t even believe she is the same kitty,” she said.

It only took a day or so before Sabrina came out from underneath the bed to greet Linda when she entered the room – something she had never done before. And quickly after that, she would boop Linda’s finger with her nose and let her pet her head.

“I can’t even imagine having to rehome her with somebody else. I’m just glad that I was able to bring her here.”

“One day I was petting her, and just out of habit from having my other cat, I reached down and picked her up. She didn’t love it, but she didn’t freak out,” she told us with pure excitement. “After that, it was like we both just looked at each other like, ‘Oh my gosh! I just picked you up!’”

Mind you, this is only days after the transition. It will still take some time for Sabrina to fully adjust, but things are looking up. She even has to be touching Linda now when she sleeps, curling up on her shoulder, laying at her feet or sprawling all 16 pounds of her across Linda’s body.

One of her favorite things to do when Sabrina still lived with her parents was drink from the faucet. It drove Mavis crazy sometimes, always having a cat jump up on the counter to play with water when all she needed to do was wash her hands, but it was cute. Even the caretakers at her father’s apartment thought the same no matter how many times they’d cleaned cat hair off the faucet. Everyone loved her.

Sabrina has her own water fountain now and a sweet reminder from home, the cat tree Linda brought over from Bud’s apartment that now sits in front of the big picture window in her bedroom.

It’s safe to say she’s settling in just fine. Well, better than fine now that she’s letting Linda love her. A five-year-long attempt she can finally not work so hard for.

“It makes me feel good to know that I could do that for my parents.”

“She’s just been through so much,” Linda reflected. “She lost my mom a couple years ago, and now she lost my dad. And she was alone in the apartment for so long … it’s almost like it was meant to be.”

“It’s kind of bittersweet. It’s a reminder that [my dad] is not with me any longer, right? But at the same time, I’m happy that I can do this for him,” Linda said. “They would have been very worried about what would’ve happened to her if something happened to them. They would definitely want her cared for. So it’s kind of a way for me to give back to them by being able to bring her in and give her a nice home … and lots of pets and snuggles.”

It’s our mission to find a way to keep pets with the people who love them, and sometimes the solution is as simple as can be.