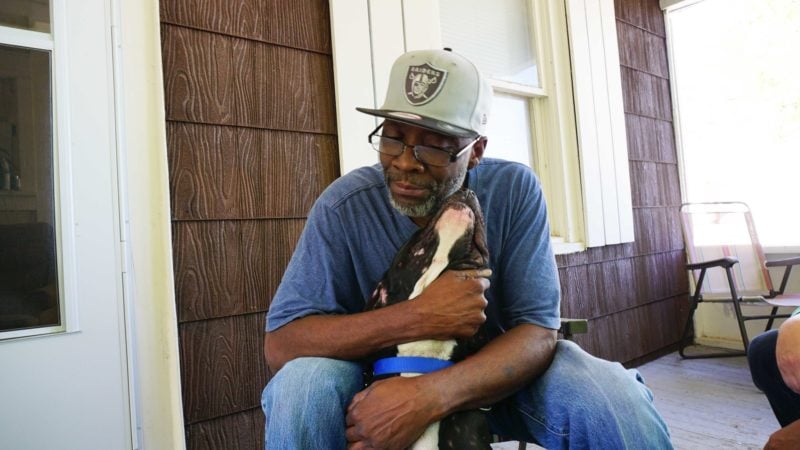 Robin lives alone. That’s the way he likes it.

He’s not a cranky guy, mind you; he’s actually a very kind and caring man. He’s lived in houses full of people coming and going, though, and he’s at a point in his life where he just doesn’t want that.

When he had a stroke, though, living alone became much more difficult. His recovery was long and slow. His life was now focused on relearning how to do the things all of us take for granted. In the morning, for instance, getting up and getting dressed was a painstaking process that could stretch beyond an hour.

That’s when he got an unexpected visitor.

He noticed a big dog wandering the neighborhood, scrounging for food. He managed to coax him up onto the porch, and the rest is history. He named the dog Beast, and from then on they were inseparable. Beast made the difficult task of rehabilitation a little smoother. It’s easy to see why: the big goofy grin, the tail that won’t quit, the playful demeanor. But there’s more to it than that.

The Meaning of Friendship

He tells us his story on his front porch. Beast lies at his feet, overflowing with sweetness, smiling and wagging his tail.

Robin’s an easy-going guy, making jokes and conversation, hospitable and kind. But when he talks about finding Beast during his recovery, his tone changes.

“He saved me,” he says, and pauses, thinking. He can’t find any other words.

He gets around pretty well now. Beast did a great job helping his recovery along. It’s more and more accepted that animals can do wonderful things for patients undergoing rehabilitation. Recent studies also show that dog owners, as they grow older, tend to be more active, physically and mentally, than their non-dog-owning counterparts. Beast’s love, his energy, his sweetness, encouraged Robin along on his recovery.

Sometimes Beast pulls a little too hard for him; he’s a strong boy with lots of energy. So much energy in fact, that Robin was scared he’d get away, that he’d get out and cause trouble; he’d already managed to break his old tie-out once, and ended up getting attacked by another dog. Replacing the tie-out with a heavy duty cable made for strong dogs like Beast made that less likely to happen again, but it wasn’t just fights he was worried about. What if he got another dog pregnant? What if he ended up fathering a whole litter of little Beasts that ended up on the streets like him? Beast wasn’t fixed and Robin wanted to change that. 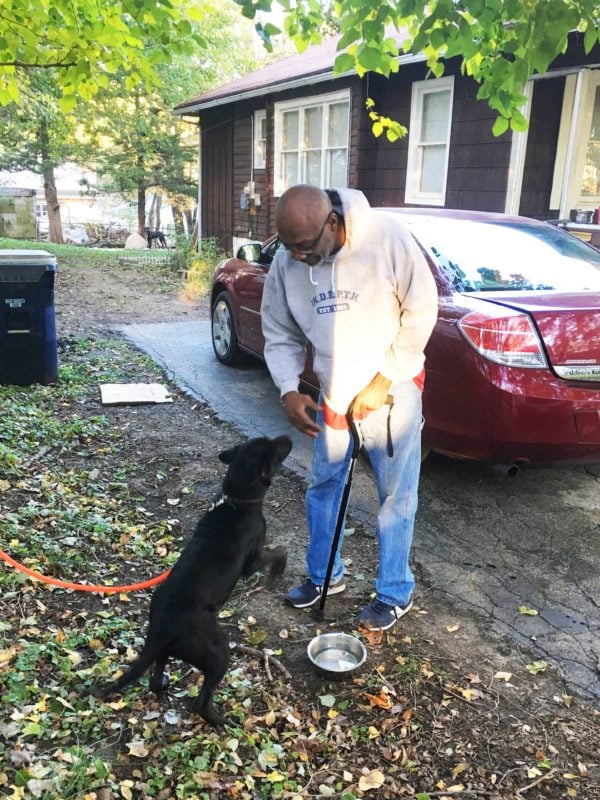 Along Comes a Troublemaker

As if that wasn’t enough, around that time a second dog showed up. This dog had been running around the neighborhood, messing things up, causing trouble like a pup.

Robin took him in and named him Riff Raff. He chuckles when he tells us the story.

Riff Raff was also not fixed, turns out.

Beast and Riff Raff are inside dogs, but they both have lots of energy and love to play outside. Unfortunately, Robin doesn’t have a fenced-in yard. He couldn’t afford dog houses for them, either.

When you own two unfixed dogs that like to be outside but don’t have outdoor shelter, well, you’re definitely in violation of an ordinance in Kansas City, MO. Animal control happened upon Robin and his situation, and it was clear to them that he wanted to do right by his pups, so they put him in contact with us.

The relief on Robin’s face when we told him how we could help would have been enough thanks for us. But getting to know Robin, Beast, and Riff Raff, and providing support to help this new family have their best chance at a long, happy life together… it has been incredibly rewarding. 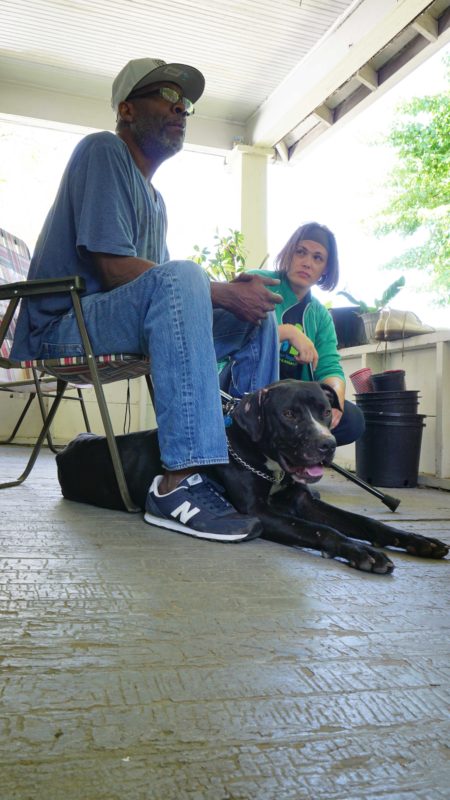 Beast and Riff Raff are fixed now. The dog houses sit in the back yard. It’s a cooler day that signals the oncoming of fall. We’re sitting on the porch with Robin. Beast is sitting with us, too, while Riff Raff is off somewhere in the house causing trouble. Beast’s tail is wagging like there’s no tomorrow. He’s grown especially fond of Kate, our outreach Field Operations Specialist, but he doesn’t want to leave Robin’s side.

Robin is excited to have both dogs fixed, to be all set for the cold weather, to have his family together with him. Riff Raff, now in the backyard, is barking. Beast is sitting still, but his tail is wagging so hard now that his butt is shifting on the porch.

“How are you doing, sweet boy?” he says to Beast.

Beast looks from one person to the next, like he doesn’t know who to love first.